BEAD WEAVING PROJECT INSTRUCTIONS: No need to scrape off these barnacles! Construct your own colony of barnacles using right angle weave and peyote stitches.  Instructions with images.

I was taking a workshop with Marcia DeCoster, and had been ooh'ing and ahh'ing over her pieces. She explained some of her creative work process. She liked to play by making little components, and then playing with their arrangements. She inspired me to play, as well.

Right Angle Weave seemed a natural starting point. It is very "architectural" and lends itself to an idea of creating building blocks. RAW gives you 4 points within the unit stitch to work off of -- and you can integrate almost any other stitch, almost seemlessly. So I played and played and played, first trying to create a very dimensional looking component.

As my "form" --in this case, a RAW diamond square -- began to materialize in a satisfying way. I found that I could force a peyote tube to emerge from the center of my diamond. I decreased each row, as I built my tube upwards. It did not take long for my tubular structure to look like a natural setting for some kind of stone. An Austrian crystal bead was the perfect final touch.

I then turned to color issues. As I picked colors and stacked them within my RAW diamonds and upwards within my peyote tube, it felt as if they were growing and emerging with life and energy.

I gravitate to nature and natural images and colors within my pieces, as I did this time. I began to see my components as sea-like -- barnacles attaching to rocks and shells and boats.

In the Blazing Barnacles Necklaceproject...

LearnToBeadGoals:- Creating a skeletal framework for making interlinked components using Right Angle Weave- Adding dimensionality to this framework- Linking component piece to component piece to make a necklace- Working tubular peyote off of right angle weave- Making your own toggle clasp, designed to be visually organic with the piece. 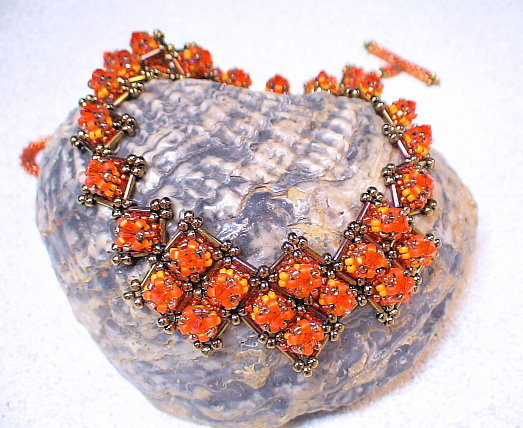